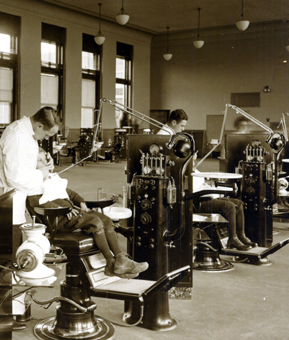 Below is a timeline of dental advances in chronological order dating back to 7000 BC. We’ve come a long way.

The earliest evidence of dentistry traces back to a Neolithic graveyard in ancient Pakistan.

The earliest known dental occupation was on an ancient Egyptian named Hesy-Re. An inscription on his tomb reads “the greatest one of those who deal with teeth, and of physicians.”

The first reference to diseases of the mouth and other tooth remedies was on an Egyptian text, called the Ebers Papyrus.

Ancient Greek scholars Hippocrates and Aristotle wrote about the pattern of teeth, decayed teeth and gum disease, and other findings.

The first book ever devoted to dentistry is written by Artznet Buchlein and published in Germany. It was called The Little Medicinal Book for All Kinds of Diseases and Infirmities of the Teeth.

Oral bacteria was first identified by Anthony van Leeuwenhoek while using a microscope.

The first dental textbook written in English was called Operator for the Teeth by Charles Allen.

The “Father of Modern Dentistry” often refers to Pierre Fauchard, a French surgeon that published the first comprehensive book about dentistry. It was called The Surgeon Dentist, A Treatise on Teeth and featured basic oral anatomy and function.

The first modern toothbrush was manufactured by William Addis.

The first dental book published in American was the Treatise on the Human Teeth written by Richard C. Skinner.

Horace Hayden and Chapin A. Harris established the first dental college better known today as the School of Dentistry at the University of Maryland.

Colgate originally makes toothpaste in a jar. In 1892, D. Washington Sheddield patented toothpaste in a collapsible metal tube which revolutionized the toothpaste manufacturing and marketing industry.

Dental schools were developed across the country.

Toothbrushes with nylon bristles first appear on the market.

Broxodent, the first electric toothbrush, is marketed to Americans.

Invisalign is introduced to the public.

Nanotechnology is expected to assist dentists in the future. This will provide early detections in oral health problems, like gum disease.